Two weeks before he ran at the 2008 World Trial, Rob needed to be castrated due to health reasons. He got to fitness in time to take his well-earned run at Llandeilo, but it was sad as I hadn't got around to getting a pup from him. Well, orders were put in to Ireland and Holland to get a related pup. Michael Gallagher's Gyp is Rob's litter sister, I had seen her running on the Hebridean Circuit in 2004. One of her litters was to Aidan Gallagher's Bill, who I always enjoy watching at work. In this litter was Serge van der Sweep's Jim, Seamus Gallagher's Glen, and Gilbert Marshall's Scot. So I was trying to get a pup related to one of them. I might still do that but Aidan put me on to Cath Krakowski who has a daughter of another brother from that litter, out of Becca (yes, James Magee's Becca). The daughter had just had a litter to Michael Gallagher's Cap. Again, love watching the dog, and always wanted something from his sire Bobby Dalziel's Cap. So I booked a pup, BEFORE Cap won the 2010 International. Sandra wants her, so a new page for Gyp in Sandra's section, though she may give her a new name. Gyp's page

After we got in the English team in 2007 at Stokesley

( link to 2007 English National presentation, can't believe it has had over 20,000 views in 2 years, there are other clips of handlers running their dogs) 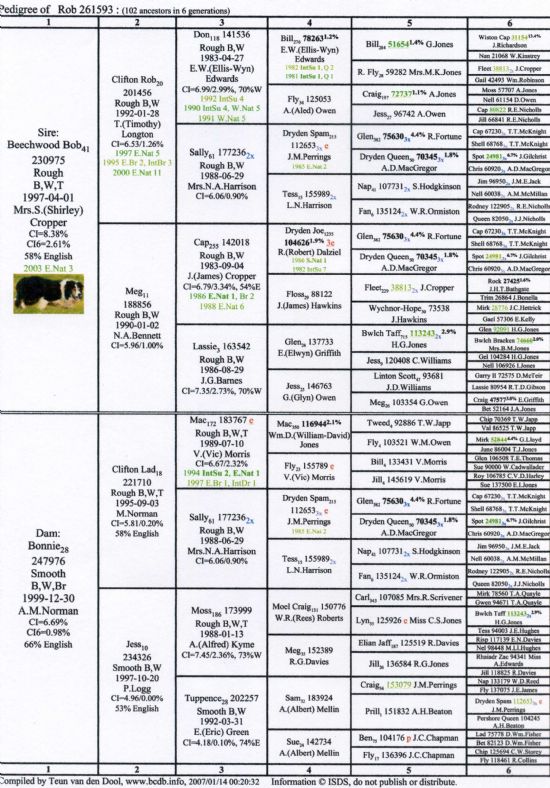