Sal was a lovely bitch, who bred really well. She had every quality that you would like in a dog, plenty of power, good to handle.

Sal is good with ewes and lambs 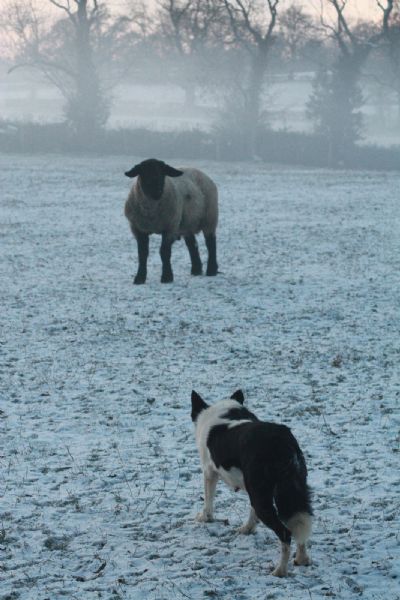 Sal had no trouble with the Suffolk tup this winter

Sandra kept a dog pup Nidderdale Ed (click here to see his page) who is pretty keen and has gone on for intensive training with Wynford Japp.

We decided to use Meirion Jones's Joe for the second litter, he ran so well at the 2007 International in Ireland and the 2008 World Sheepdog Trials in Llandeilo, gaining 6th place in both finals. It was a good choice as the pups were running after sheep at a very young age. Meirion has a stud bitch pup, Meg. Sandra has kept one, Gyp (Pip).  Rob Moore has taken one of the dogs Rebel, as he is pleased with their older half-sister Jill (Jo). I kept a bitch called Jill who started nicely and went to Anita Hermes in Germany when she was 15 months old. 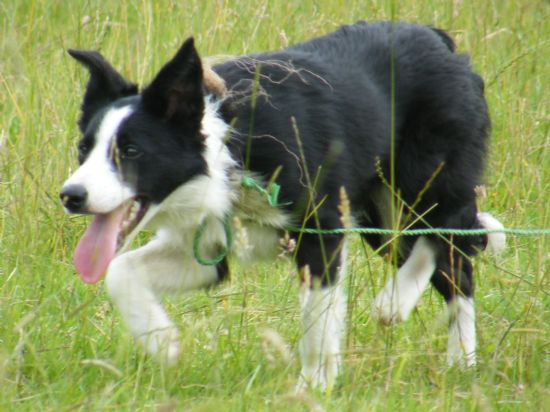 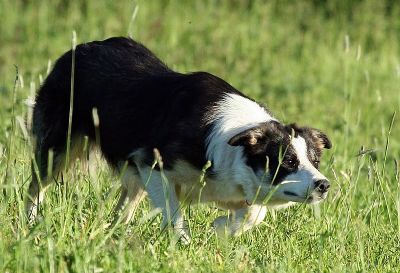 Rebel is with Rob Moore, click here to see his page 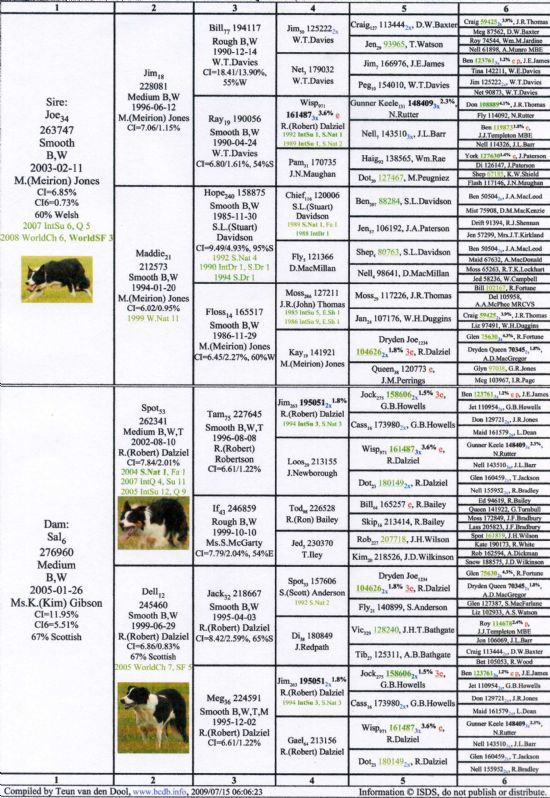 Sal's first litter was to Bobby Dalziel's Joe (2006 International Champion, and 2009 Scottish National Champion). Making them all Bobby's breeding, as Sal is by Bobby's Spot (2004 Scot Nat Ch) out of his Dell (2005 World Trial finalist)

All offspring are dna clear for cea (collie eye anomaly) so will never get cea or pass it on to their offspring.

I reared a bitch pup, Jill, she was sold to Rob Moore (he calls her Jo) when she was just holding up sheep at hand, flanking both ways. I get good reports about her. 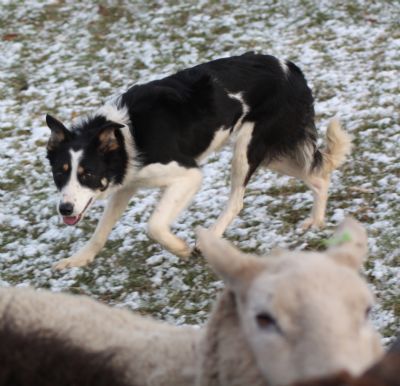 Another bitch Floss was reared and trained by Wynford Japp, she is now in Scotland. Photos by Angie Driscoll.

Sandra booked a pup from Bobby Dalziel, the same way bred as her dog Ben who turned out to be harder to handle than expected. She wanted something the same, but easier, he is by Bobby Dalziel's Spot (2004 Scottish National Champion) out of his Dell (2005 World Trial finalist). The litter had been born earlier than expected, in cold weather, and though the litter were then reared in the house, some damage had been done to the circulation in some of Sal's toes so she lost a few claws due to hypothermia. Sandra chose another pup, Maid, but took Sal as well, thinking she would make a good breeding bitch if her feet werent right. Ben is now in Holland with Ron Rogaar and Caroline Visser. As a pup, Maid kept getting out and chasing sheep, causing strife on the farm, so she went back to Scotland where Norman MacDonald trained and trialled her. I believe Maid is now in Holland as well.

We always thought it was a shame about Sal, as she does limp on one leg occasionally. She turned into a lovely bitch, keen as mustard. She wasn't formally trained as we didn't think her feet would handle a lot of work. But she has practically trained herself alongside the other dogs. And she has turned out to be a good breeding bitch, the sort that you aim to get, her pups just want to work.