Buffy is my main girl, she has been my national dog for several years but is now retired. She still deserves her place at the top of the Nidderdale tree. Her speciality is lambing time and helping me to train the youngsters. She is my right-hand girl.

I have kept a bitch from her, she is called Nidderdale Meg, her father is Nidderdale Rebel.

I went to report a Northumberland League training session at Kirkley Hall where Paul Bristow was the shepherd and I was tempted by some pups by his Bill. There was two nice black and white bitch pups, and a slate blue bitch pup that he was supposed to be keeping for himself to train. The pups were free-range, looking for sheep and the blue pup was eyeing sheep in front of me. When I went back to collect Jill, both her and Buffy were chasing sheep around a paddock. Paul said I could take my pick, so I chose Buffy, because I like slate blue. Jill went to Paul Turnbull who ran her one year in the Northumberland League nurseries with success, and sold her on for work. Buff just kept progressing all the time, usually waiting for me to teach her something. I had a toddler at the time I got her, and have had two more children since. But she has made the grade of open trial dog, none the less. October 2007, I ran her in the first Ryedale nursery at Jane Simpson's and she gripped on the crossdrive when a sheep tried to run back up the field to the letting out pen. I decided not to run her, but to get good control. The following year, I ran her there again, and she has never looked back She had a good nursery season, and this year, has run in the opens, getting better and better all the time. She won her first open a few weeks ago, and should have enough points to run in next year's English National at Alnwick in Northumberland, where she has many trialling relatives. 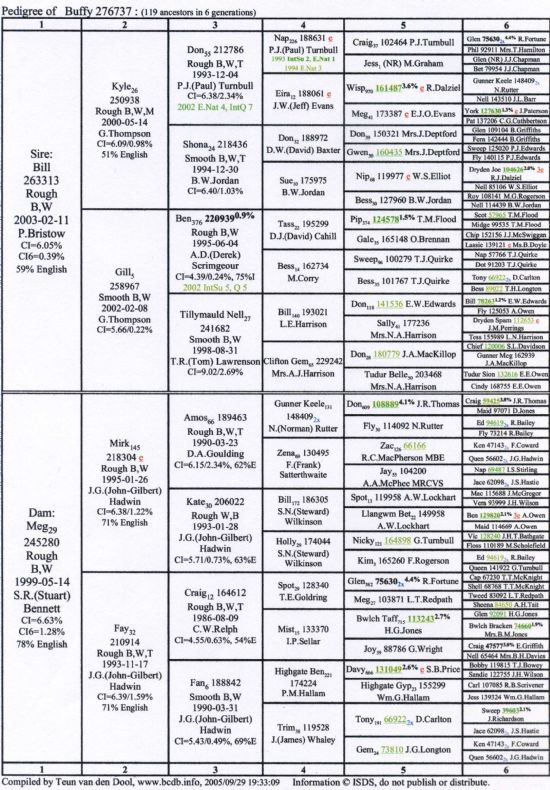 The following link is to one of Laura Cunningham's webpage where there are videos of Buffy and Lad (second video down), and Daz, Sam and Jo (third video).
CorrieDhu Sheepdogs
sitemap | cookie policy | privacy policy | accessibility statement